Cyclopes are one-eyed giants and can be found as enemies or can be recruited as members of the player's team. They are strong and make great fighters.[1]

Playing with: Cyclopes are slow, powerful units. If your looking for massive damage equip them with a heavy mallet, on the other hand if their fling effect is what you want give them a light sword. This makes them useful for both high damage and utility. Due to their high health pool, equipping one with a helmet can make them very hard to kill, but you could also keep their weight as low as possible to deal the most damage possible.

Playing against: Ranged units are very helpful in taking out cyclopes. The cyclops moves very slowly, meaning that a ranged unit will easily be able to shoot the cyclops to death while moving away from it. In addition, his fling can backfire if he doesn't catch up, creating more distance between the two of you. Since the cyclops is essentially two units in one, crowd control effects like stunning or netting can be doubly helpful.

Notice: To add cosmetics, please edit the Template below, add a file with a square resolution with the name "itemname followed by(Helm/Sword/Mallet/HeavyMallet/OffHand).png", , and add the cosmetic to the table as an MP nolink template. 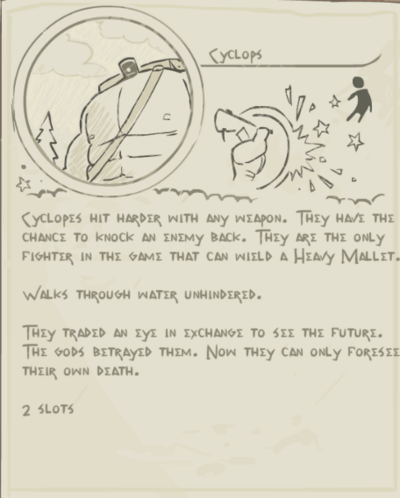