Electrobot can be encountered as enemies or can be a playable unit. They are machines that utilize electricity and, according to loading text, supposedly come from the future.

Playing with:
In the early game where there are a lot of enemies massed together, make sure to use Chain Lightning as it can deal very good consistent damage. Always ask yourself if a chain lightning is better than a 31% chance to shock in melee. Observe the enemy formation to see where to begin your chain lightning from. Be careful not to deal more damage to yourself than to your enemy! In the late game, it's common that the enemy cannot be chained, it is good to use the melee shock then. It's often a good idea to send Electrobots after Pixies, as they destroy them easily. You can snipe and dispose of Mascots safely, too.

While taking a unit of gnomes may seem like a good idea, since they can heal your Electrobot, if you only have one, it may be a wasted slot unless you need the Gnomes' fling ability as well. Try to arrange your front line so that enemies will have to stand in water to fight you. This will boost your electrobots power by a large amount, especially if you can hit several in the water with Chain lightning.

Playing against:
Positioning your units to avoid the chain lightning bounces will severely limit how effective enemy Electrobots are. Because the chain lightning can target allies as well, you can leave units with a single hex gap to an enemy, but no allies, making it hard for your enemy to use this ability safely. Avoid standing in water at all costs.

Cosmetic items you can give the Electrobot to change their look. Electrobots are a creature with purely Cosmetic Items, with none of them affecting stats or resistances. Electrobots has 1 cosmetic category, Heads. 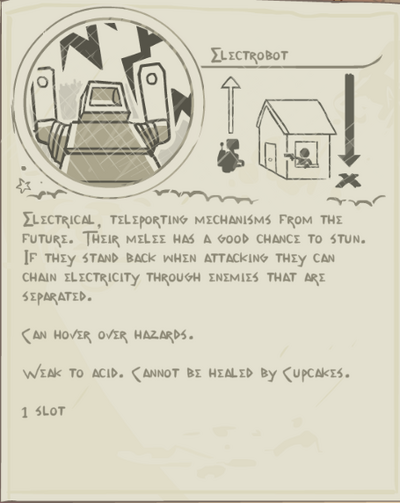