Gnomes are creatures that can be encountered on the World Map as enemies or recruited to the player's team. They are small, lazy creatures that sit in their floating chairs.

A Gnome flinging a unit.

A Gnome healing an Electrobot.

Playing with:
Gnomes shine with their ability to position units over long distances quickly. Having a single pair in 2v2 matches might give your team the edge.

Of course, due to their healing ability on Electrobots, they work well together. It's good to have made your Electrobot tank a bit of damage, so that Gnomes may heal it up when not actively moving units around the battlefield. Both are flying units that can avoid hazards, staying together with the Electrobot in front if needed. An advanced technique is to use friendly Gnomes as lightning arc transmitors. By understanding how Electrobots' chain lightning bounces every 2 hexes and prioritizes enemies over allies, you can shoot it so it jumps from an enemy, to your Gnome, to another enemy. Your Gnome will take almost no damage. Gnomes are also good against Electrobots, taking almost no damage from them and dealing a bit of bonus damage. Use them at the edge of your formation to force enemy Electrobots to target Gnomes for their chain lightning attacks!

They function well with Mushrooms, who have low movement but shine when disrupting the enemy's backline. This also moves the Mushrooms away from your team, avoiding friendly fire farts.

Playing against:
Be mindful of Gnome Launches. Focus them down if used with Electrobots, as their healing is not to be underestimated. Otherwise, they are a relatively weak presence that can be left for last.

Cosmetic items you can give the Gnome to change their look. Gnomes are a creature with purely Cosmetic Items, with none of them affecting stats or resistances. Gnomes has 1 cosmetic category, Chairs. 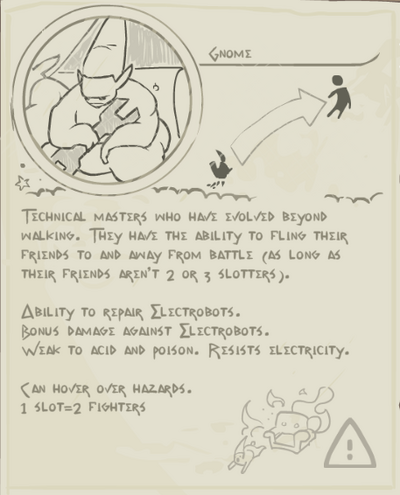