Gorgons are large snake-women with the ability to wield swords of any size, spit acid, and spawn additional units.

Gorgons will attack with their equipped sword in melee. Otherwise, they can spit projectiles that do acid damage from a range of 2-3 hexes and have a chance to slow the target. The projectile cannot be blocked by shields.

Whenever a Gorgon takes damage, there is a chance that they will spawn a small snake minion.

These minions are AI controlled and very weak, dealing between 1-3 acid damage in melee , having a 3-hex movement speed , and 3-7 health points, so they're useful for blocking attacks from enemies or redirecting their hits. They obey autobattler commands.

Any damage or kills achieved by a Gorgon's minions count for the Gorgon. This can lead to clutch level-ups in dire situations.

Gorgons take up two slots in the player's team.

Gorgons do not lose weight from being made heroes, and thus their speed will not increase when made heroes.

Try to get your Gorgon to tank low damage, repetitive attacks. Doing so will maximize the chance to spawn snakes.

The melee attack will not deal bonus damage to Electrobots or Gnomes, only their projectile acid spit.

Teaming a Gorgon up with explosive units such as, Mushrooms, Pixies, Rainbow Horses, Electrobots, or explosive ranged attackers can lead to more snakes.

If the Gorgons health starts to run low, try moving it away from high-damage enemies so they can use their projectile acid from range. The projectile acid spit can cover for damage as you move in other units to the front.

Avoid using multi-tick damage sources when attempting to take down a Gorgon, as each attack has a chance to spawn a snake.

Notice: To add cosmetics, please edit the Template below at Template:GorgonCosmetics, add a file with a square resolution with the name "itemnameCosmetics.png", and add the cosmetic to the table as an MP nolink template. 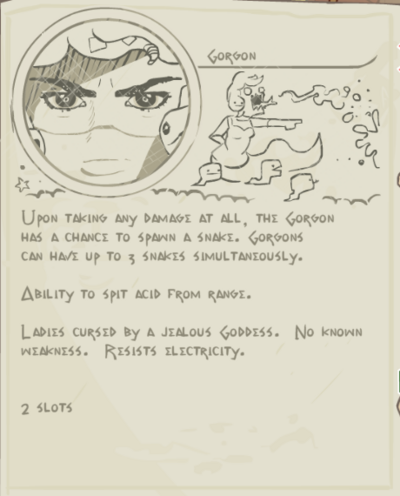 Gorgons turn to stone when they die.

There is a Gorgon of similar appearance in another Behemoth game, Castle Crashers named Medusa, who also launches out snake enemies.

Gorgons in the game cannot turn enemies to stone, unlike Medusa in Castle Crashers.

Gorgons can be found in swamp biomes.

There can be up to 3 snake minions on the battlefield.

The Cosmetic "Leviatha's Crown," may only be obtained by killing all the enemies on the first stage of the Chog bossfight except for Captain Leviatha, where which you are presented with the opportunity to recruit her instead of killing her before proceeding to Stage 2.

The Gorgon is voiced by Monica Franco, who also voices Pandora, Pipistrella's sister.

The "jealous goddess" referred to in the journal entry is a reference to the Greek goddess Athena cursing Medusa, turning her from a beautiful maiden into a Gorgon.

The journal entry's portrait is a reference to a certain anime. I don't know which, but it is.