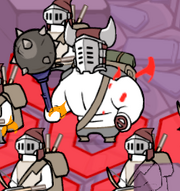 Helmitor in the second fight of the game

Helmitor is one of the grumpy warriors (the "Helmetites"). In the beginning of the story, Helmitor and his Helmetites assault Papastrella's castle, successfully killing him in their escape from Horatio and Pip. After meeting Sofia and gaining some recruits, the player launches an attack on Helmitor's Fortress in the aptly named quest, 'Helmitor's Fortress'. The player fights up through the fortress after breaking down the main gates and upon reaching the top they will fight Helmitor. When enough damage is dealt to Helmitor, he will retreat to the spaceship and the player has to fight him there. When enough damage is done to him during the Spaceship fight, his helmet breaks, revealing his true face: a Bird. Once Helmitor is defeated, Honey Kiss grabs the ship and a cutscene begins.

The player has a chance to recruit him during 'Helmitor's Fortress'. If Helmitor is recruited after the reveal of his bird head, he will enter the player's roster with the bird head and not his helmet.