Kobolds are small creatures with a backpack. They are thieves that are good for getting behind enemy lines.

Playing with:
Kobolds are fast, but have low health. They also have fairly low damage by themselves, as is the cost of getting two of them (They hit twice or thrice for 1-2 damage). Since they can run fast, have fire resistance and can dodge projectiles, they are naturally very good at taking down ranged units, and are exceptional at taking down mortars. Moving so fast means that they can get to the backline within turns, before the archers will be able to kill them, and they'll take next to no damage from the mortars. When they get over to the archers, they can quickly stab them to death, dealing 4 damage per hit each, meaning they'll hit the archers for 24 damage a turn. Mortars will not fare any better.

Don't just expect to run over to the archers and kill them however, there's still a bunch of people with swords, maces, shields, claws, beaks and other scary things standing in front of them. In order to not get eaten by the enemies frontline, Kobolds must utilise their mobility to flank the archers; Wait for your fighters and their fighters to start hitting eachother, and then have the Kobolds charging around the side of them in an arc. Then they will make short work of the archers. After that, you can bring them in from the back to kill Cupcakes, Mascots, Pixies and Octoclopes who were previously hiding back there as well, as they'll still go down quickly, regardless of your lack of a damage boost. They're also really good at taking down low health opponents as their damage output is reliable, high when they're together, and they are fast. This will also help them avoid damage, as their only targets should die and won't retaliate.

Playing against:
Kobolds are annoying, but squishy. Once the high value targets like mascots and cupcakes have been taken care of, hit these guys before the cyclopes and humans. Seeing as they'll go down fast, the damage potential of the enemy team will go down quickly as well. Also, try a little harder to keep your archers protected if there are kobolds around by keeping them closer to your team. This puts them in a more precarious position but you'll be able to quickly wall off the archers from them with some quick repositioning if the kobolds go after them.

Cosmetic items you can give the Kobold to change their look. Kobolds are a creature with purely Cosmetic Items, with none of them affecting stats or resistances. Kobolds has 1 cosmetic category, Backpacks. 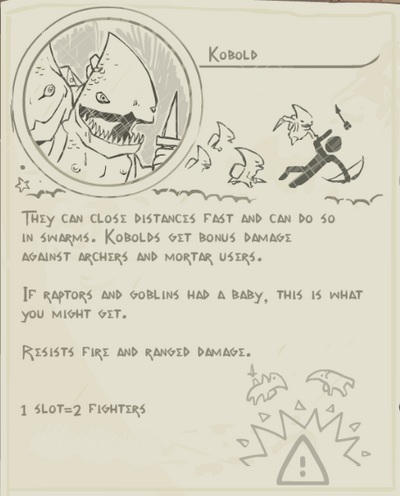 The "Green Shell" backpack cosmetic is an obvious reference to the Koopas from the Mario Bros. saga