Edit
watch 01:25
Jurassic World: Dominion Dominates Fandom Wikis - The Loop
Do you like this video?
Play Sound
This article is a stub. You can help Pit People Wiki by expanding it.

Octoclops are floating, one-eyed creatures with a tentacle tail. They are most often found near the sea and beaches, though many other parties do contain them. The 'octo' comes from the fact that they have an 8-segmented brain and are based off of octopuses.

Playing with the Octoclops requires good positioning and targeting. As it has low health, it should almost never be on the front line. Target the enemy's strongest creatures to give the best chance of either the creature hitting its own team or getting hit by its own team.

As the Octoclops Abilities can severely impacts your team's ability to fight properly, it is generally a good idea to try to focus down this creature. Octoclopes do extra damage against each other, so if you have one on your team you can use yours to deny the other one it's abilities and damage it.

Cosmetic items you can give the Octoclops to change their look. Octoclops are a creature with purely Cosmetic Items, with none of them affecting stats or resistances. Octoclops has 1 cosmetic category, Bodies. 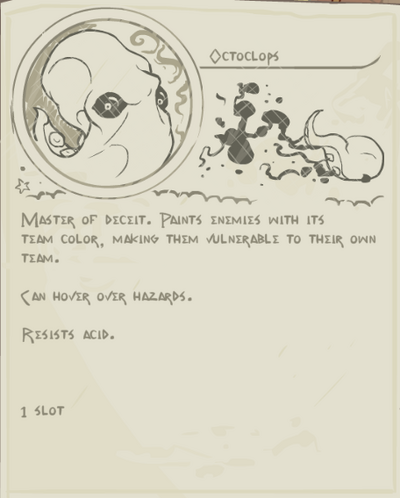