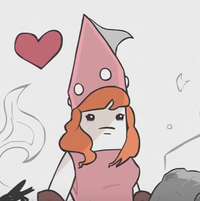 Pipistrella is a (very capable) princess the hero Horatio meets while looking for a shelter. She asks him for help against the grumpy warriors invading her castle, and to save her father from their attack. During the battle, her father throws her his staff and is subsequently killed by falling rubble.

During the quest Reptile Recipe it is revealed that she at one point had a pet lizard named Lizardo, and he disappeared one day. At the end of the quest, the lizard you have to deliver turns out to be Lizardo.

She can be seen in earlier screenshots of the game, but also in the Video "The first 20 minutes of Pit People". In the video, she is using a mallet against the warriors.

In the game, she's by default a heavy-damage character. Her father is King Papastrella. Pipistrella mentions having a sister in a quest, and Dan Paladin confirmed that her sister is Pandora, who you can play as if you are Player 2 in Co-op.