Not to be confused with unicorns, which do not exist. Rainbow Horses are back line artillery units which can deal massive but unreliable damage to groups of enemies.

Rainbow Horses are ranged units that throw their own horns as projectiles. If not blocked, these projectiles eventually explode in a colorful and deadly manner. Rainbow Horses have no moves for close combat, and should be protected by their team.

The survival guide states: "Don't let their light-hearted demeanor fool you. They launch regenerative exploding horns from atop their brow. Also, they don't always explode..."

Cosmetic items you can give the Rainbow Horse to change their look. Rainbow Horses are a creature with purely Cosmetic Items, with none of them affecting stats or resistances. Rainbow Horses has 1 cosmetic category, Manes.

Note: At least 1 more Mane has been confirmed for Release. 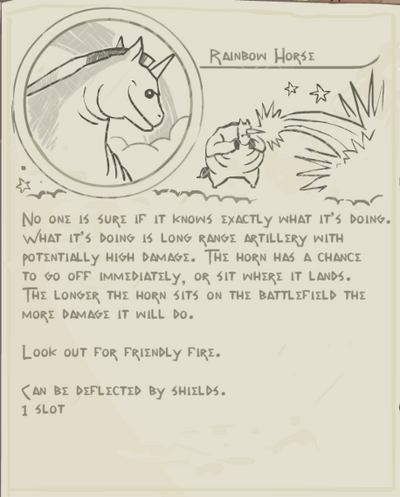