Spidaurs can be found as enemies in the wild or can be recruited onto the player's team. They are a tanky half woman and half spider that can serve as a mount.

Playing with:
Since Spidaurs are tanky and others can mount them, it is best to have a unit with low defense mount a Spidaur. This will allow those units to perform their actions more safely in fights. However, mounting takes a round and the mounted Spidaur will move 1 hex less per turn. It is best not to mount at the beginning if you want to get placements up fast.

Cosmetic items you can give the Spidaur to change their look. Spidaurs are a creature with purely Cosmetic Items, with none of them affecting stats or resistances. Spidaurs has 1 cosmetic categories, Legs. 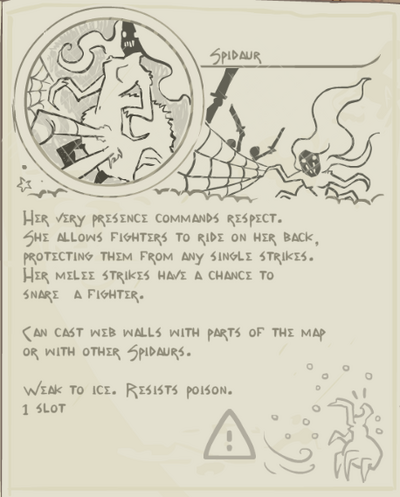