The troll mom is a large unit, taking up 3 spaces of your team composition. It is weak against fire, and will often take extra damage from area of effect attacks because of its large size.


The troll mom is fairly difficult to build a team around, as it takes up three team slots and does minimal damage. Because of this, any team using the troll mom needs to make use of its huge HP pool. To maximize its effectiveness, try using it as a tank until it is at near half health and then run. The troll mom will continue to tank for and support your other troops with its minions.

However, an alternate defensive approach can be taken while using the troll mom. Due to their ability to spawn minions, it can sometimes be advantageous to set up defensive positions and allowing the enemy to come to you. As the minions will draw up to four enemies away at a time, it is best to have two high dps ranged units and a secondary tank or support. As troll moms and their minions have the ability to regenerate health (although not much) it is not strictly necessary to have a slot taken up by a healer.

One thing to keep in mind about troll moms is that they are not the only unit in game which can spawn other units, but troll moms are by the most effective when it comes to the unique mechanic. Gorgons occasionally produce snakes when taking damage, however they do not spawn these units by any other means. Gorgons however only take 2 spaces while the troll mom takes up to 3. So if you are considering on taking 2 troll moms in your roster you may want to consider using a gorgon instead of secondary troll mom. This is advisable as the gorgon can also use close range and long range attacks, allowing more flexibility in combat with what options to take when confronting the enemy. It also allows 1 extra free space to take which can be filled in with some thing such as a mascot or cupcake to act as support (cupcake is ill-advisable however for reasons on the second paragraph above).

Cosmetic items you can give the Troll Mom to change their look. Troll Moms are a creature with purely Cosmetic Items, with none of them affecting stats or resistances. Troll Moms has 1 cosmetic category, Heads. 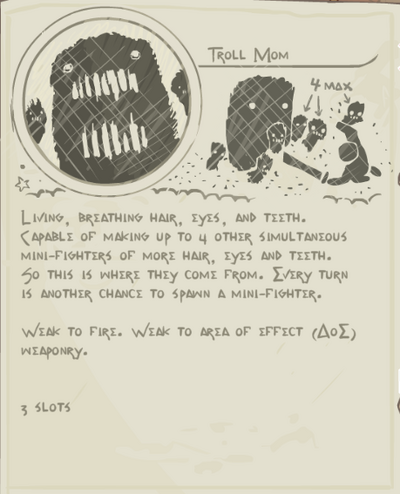