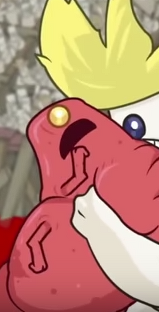 Yosef eats Uvulor during the end of the Chog battle.

Uvulor is a worm-parasite looking Demi-Clops, attached to Chog's mouth. He is Yosef's brother in law, but is later eaten by Yosef as a new host.

You have to beat Uvulor during the Chog battle to move on with the story.

Uvulor will move in and out of Chog's mouth to different angles of the boat, making it hard to defeat him quickly.

He will shoot a plasma cannon that does an area of damage to the boat.

When he enters Chog's mouth, you have to hit it to open up his mouth, allowing you to attack Uvulor.