Vampiresses can be encountered as enemies or can be a playable/recruitable unit. They are bat-like creatures with a thirst for blood.[1]


Vampiresses are excellent for picking off weakened enemies. They strive on bleeding units, healing a lot on every hit on vulnerable foes. It is recommended to keep your Vampiresses safe during the early game, do not allow them to get hurt too much, as they are fragile and can fall quite easily. Keep them surrounded by allies, and don't allow them to be surrounded alone.

Instead, have more sturdy units lower the health of enemies so the Vampiresses can swoop in and feed, dealing very good damage and receiving a lot of healing. Let your Vampiresses feed on very low units while you use your other fighters on more healthy enemies.


Vampiresses are vulnerable to ranged and sharp weapons. They are also ineffective against lifeless targets. Using Zombies to block them in, disabling their healing attacks, is very effective.

It is often a good idea to try to focus enemy Vampiresses down as soon as possible, as they are quite easy to fell and become a huge threat in mid and late game.

Have a long rage that can not melee with some decent amount of HP and lure the vampiress and let it just punch it the whole time while you kill the other ones in the enemy team. I recomend you use this strategy pretty early.

Cosmetic items you can give the Vampiress to change their look. Vampiress are a creature with nearly purely Cosmetic Items , with none but one of them affecting stats or resistances. Vampiress has 2 cosmetic categories, Heads and Backs. 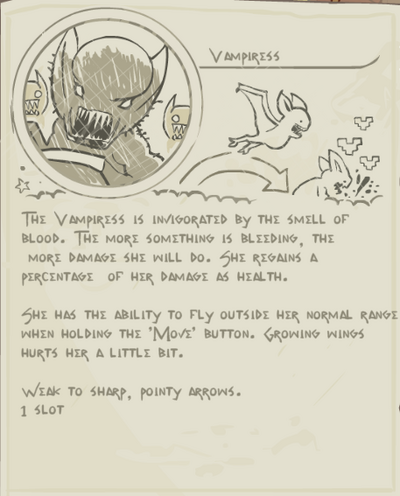